There’s been a lull in the BharatPe saga since cofounder Ashneer Grover resigned from the company last month. That lull ended yesterday when Grover told us that he and other investors had picked up Bhavik Koladiya’s stake in the company. Koladiya, one of BharatPe’s original cofounders, was removed from the company and its cap table after he was convicted of credit card fraud in the US in 2015.

Ashneer Grover, cofounder and former managing director of BharatPe, told us on Wednesday that the shares of Bhavik Koladiya – one of the company’s original cofounders – were bought in a pre-Series A funding round by him, Sequoia Capital, cofounder Shashvat Nakrani, and angel investor Beenext.

Catch up quick: Koladiya was convicted of credit card fraud in the US in 2015, after which he was removed as a cofounder and taken off BharatPe’s cap table. He was retained as a consultant.

We had earlier reported that his purported stake in the company was becoming a bone of contention after Grover exited the firm in March. Grover’s latest comments add a new dimension to the saga. 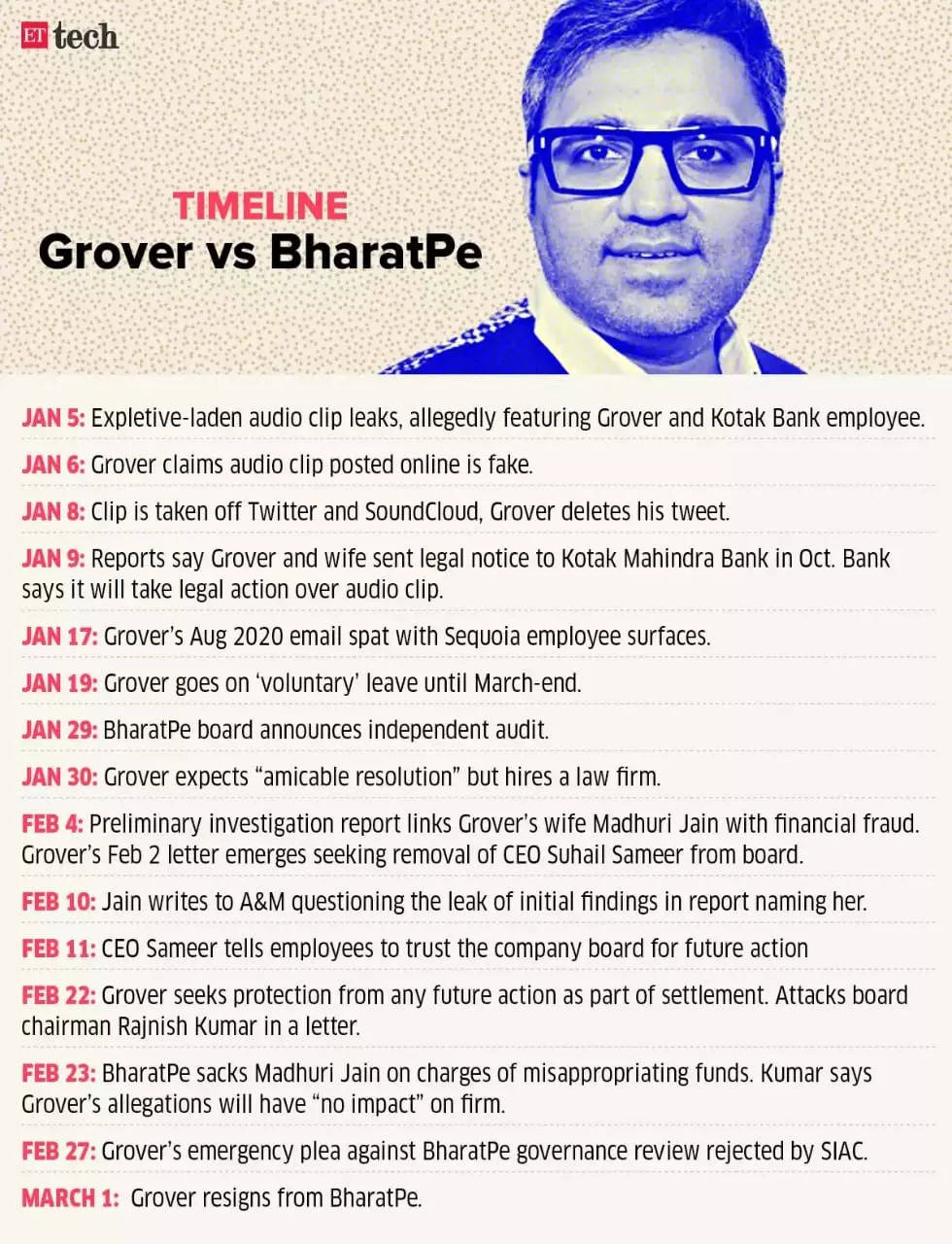 Grover’s email to board: Grover also recently wrote to the board on the issue of Koladiya’s alleged stake in the firm, asking it to remove him from the company at once. If they didn’t, Grover said, he would ask the Reserve Bank Of India to revoke BharatPe’s banking licence and scrap its application for a payment aggregator licence.

BharatPe maintains Koladiya is an independent consultant and does not have any direct management role in the company. “He acts as a mentor for the technology and product teams,” the company told us.

High stakes: We had previously reported that BharatPe was looking to claw back Grover’s shares after he abruptly resigned from the company and its board on March 1. He currently holds roughly 8.5% in BharatPe, of which 1.4% is not vested, sources told us.

Fresh start: BharatPe board chairman Rajnish Kumar told us last week that after Grover’s exit, the board and investors were now aligned to take the company public in the next 18-24 months. He said the company was undertaking a major revamp on governance, procurement and other processes at the firm. 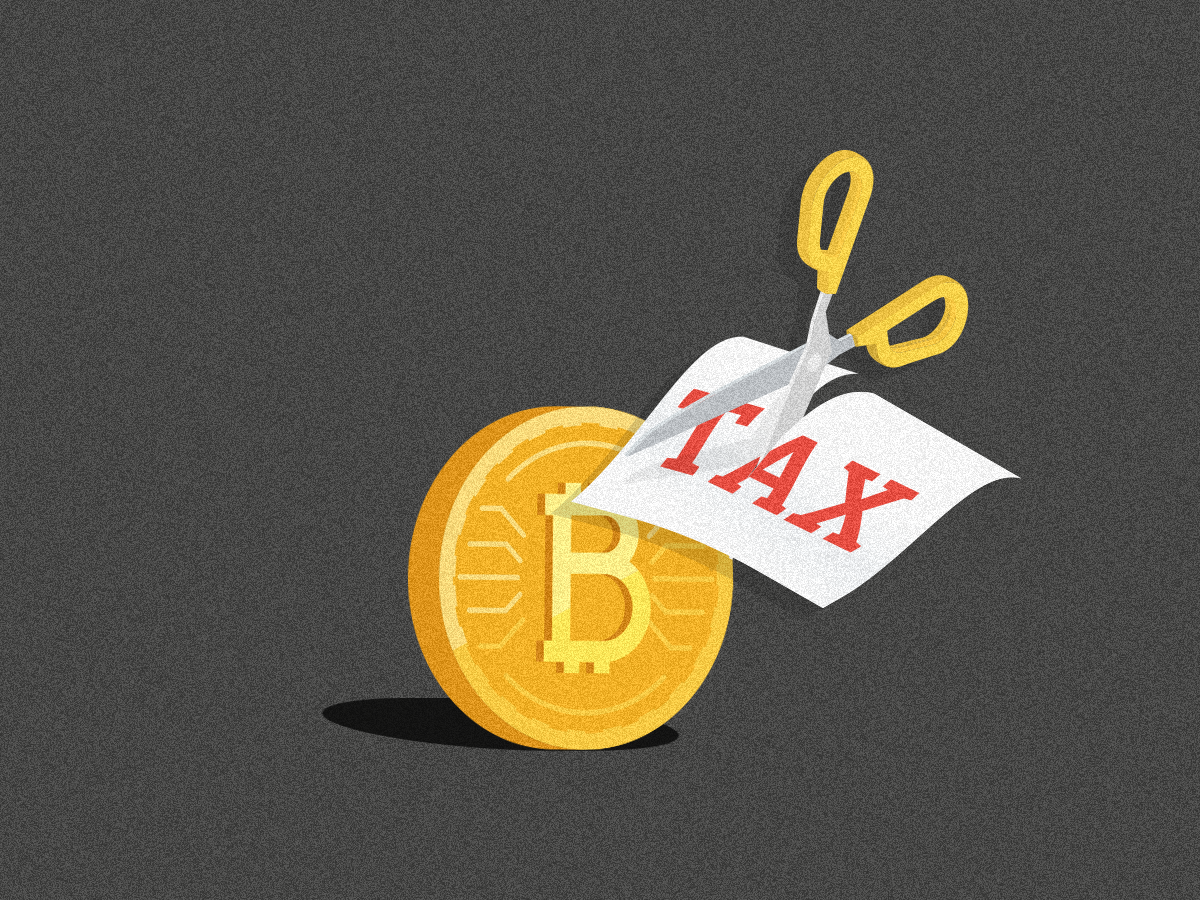 Order books of cryptocurrency firms are under stress and investors are finding it hard to buy or sell these assets because liquidity providers, deterred by India’s harsh new tax on ‘virtual digital assets’, have decided to back away.

What’s the issue? Until March, liquidity providers helped exchanges with ‘float’ – or the difference between the buying and selling price – to conclude transactions.

With the newly introduced 1% tax deducted at source (TDS) on every crypto transaction, liquidity providers must provide a larger float, industry trackers said.

Crypto logjam: Industry trackers said some trades to the tune of Rs 1-2 crore, especially on the sell side, have been stuck for the past few days at top Indian exchanges. Often this is because there are no corresponding buy side orders. But in the absence of liquidity providers, it becomes even more difficult for exchanges to execute such trades, insiders said.

Critical role: Liquidity providers are extremely important in stock and currency markets. They are even more crucial to the cryptocurrency sector for various reasons, including the high volatility of these assets.

Unlike currency and stock trading, liquidity providers for cryptocurrency exchanges are not organised players but individuals, insiders said. 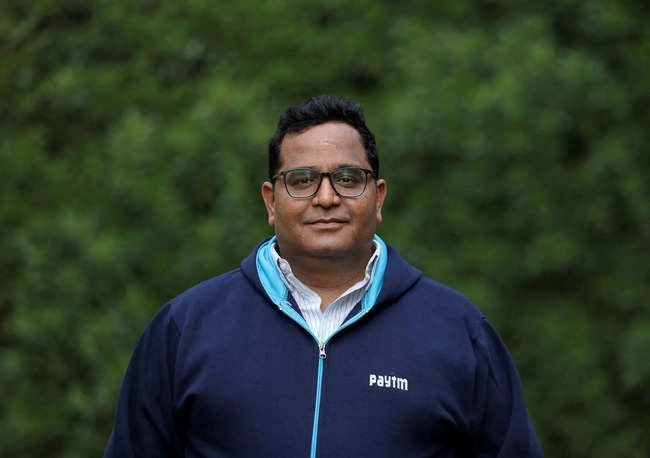 Paytm’s parent firm One97 Communications is looking to break even on earnings before interest, taxes, depreciation, and amortisation (Ebdita) by end of September 2023, its founder Vijay Shekhar Sharma wrote in a letter to shareholders filed with the exchanges on Wednesday morning.

VSS locked in: Sharma added that his stock grants would be vested to him only when Paytm’s market cap crossed the IPO level on a sustained basis.

In March, BSE had sought a clarification from Paytm on the continuous fall in its stock price.

Operating results: Announcing its operating results for the quarter ending March 31, 2022, Paytm said that it disbursed 6.5 million loans worth Rs 3,553 crore (roughly $474 million) over this period. It had clocked 4.4 million loan disbursals in the previous quarter.

The company said it had 70.9 million monthly transacting users and deployed another 900,000 point-of-sale terminals during the quarter. 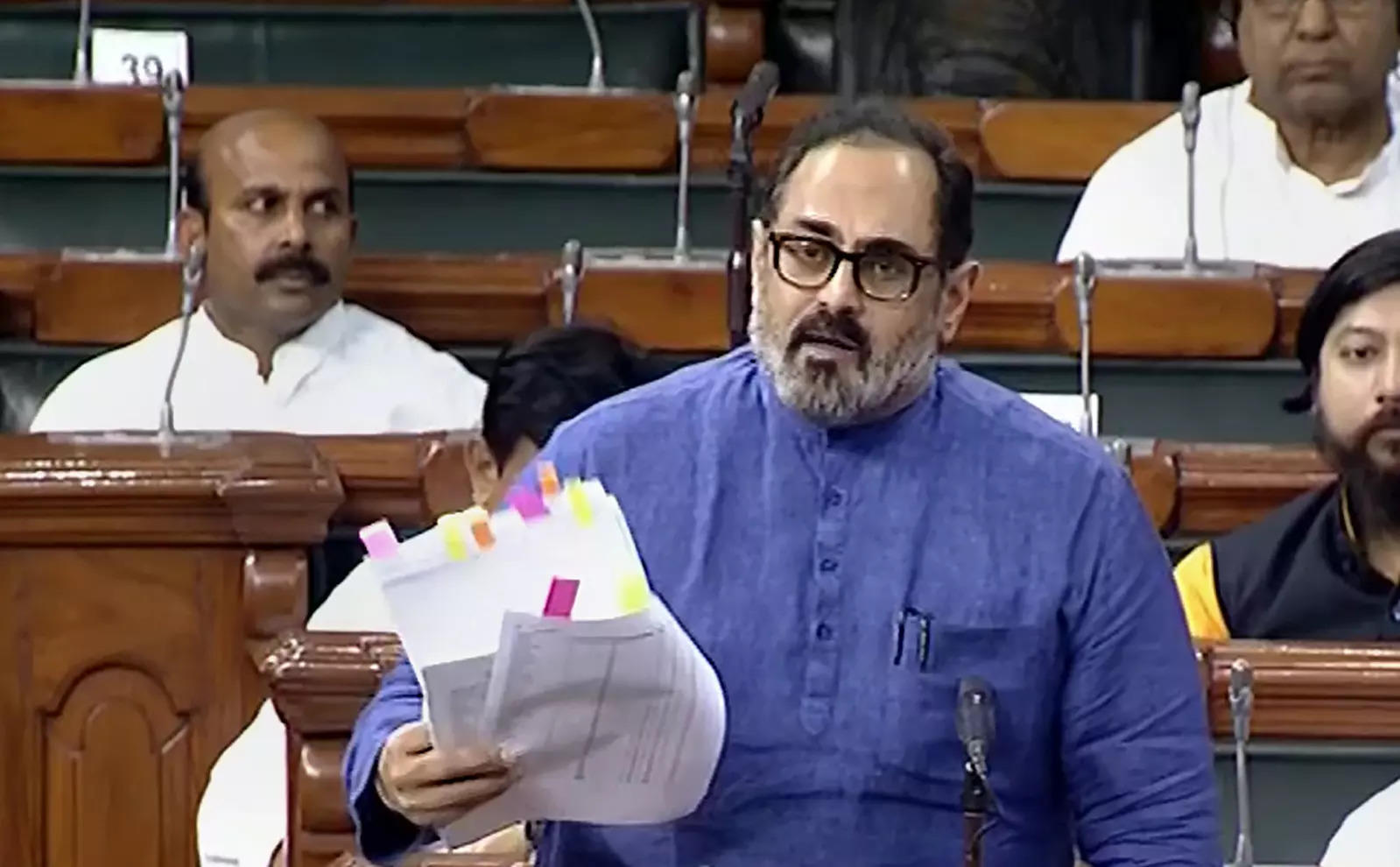 The government said on Wednesday that the purpose of the draft India Data Accessibility and Use Policy was not to commercialise people’s data, as it sought to quell fears that the policy would lead to privacy infringements.

“This policy does not envisage any sale of data or incentive for data collection. The objective of the draft policy is not commercialisation,” Union Minister of State for Electronics and IT Rajeev Chandrasekhar said in a written response to a question by Congress MP Manish Tewari in the Lok Sabha.

Tewari, who was also a member of the Joint Committee of Parliament studying the Data Protection Bill, 2019, also asked whether the government was aware that holding consultations and deliberations on the bill was delaying its introduction despite the JCP tabling its final report on the proposed legislation.

In response, Chandrasekhar said there “have been no deliberations and consultations on the report of JCP”. The JCP tabled its report before Parliament in December.

Privacy fears: The government’s draft policy on data accessibility and use has stoked concern among industry members and activists, who fear it would trigger increased privacy risks in the absence of regulatory cover for personal data in India, we reported last month. 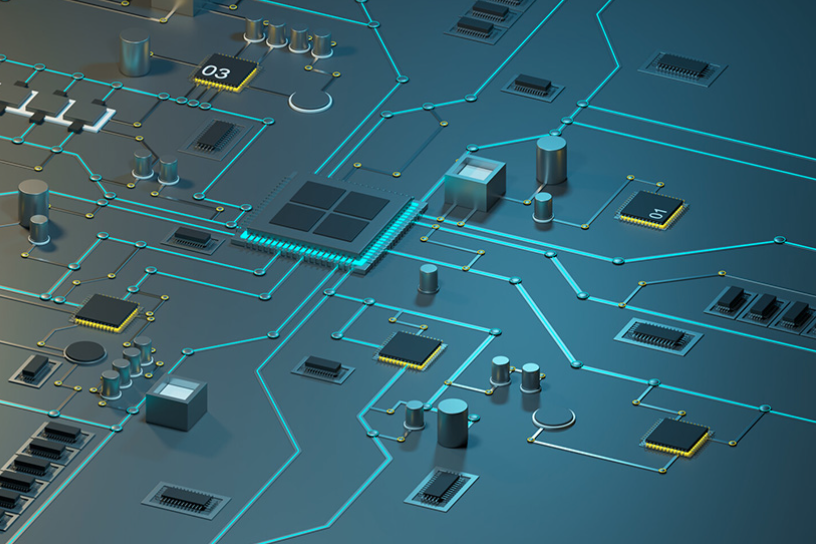 The Union Electronics and IT Ministry has appointed veterans from the software, electronics, and investment and asset management sectors, along with a galaxy of senior civil servants to run an advisory committee to the recently announced semiconductor manufacturing policy, it said in a release.

In mid-December last year, the IT Ministry unveiled a Rs 76,000-crore incentive policy for semiconductor and display unit manufacture, among other components. In an earlier release, the ministry has said it has already drawn over $20 billion in investments from five ventures, who have filed applications for incentive approval.

Flipkart has launched a separate app for its healthcare business, Flipkart Health+. It will operate with the marketplace model, in which third-party sellers will offer medicines and healthcare products on the platform.

Operating model: To start with, the platform will have over 500 independent sellers who have a network of registered pharmacists for validation of medical prescriptions and accurate dispensation of medicines. According to Flipkart Health+, it has put in place various quality checks and verification protocols to offer genuine medicines.

Why another app? In the future, the company plans to bring on third-party healthcare service providers that will offer other value-added services such as teleconsultation and e-diagnostics. This is one of the reasons Flipkart decided to establish a separate app for its healthcare business.

Other Top Stories By Our Reporters 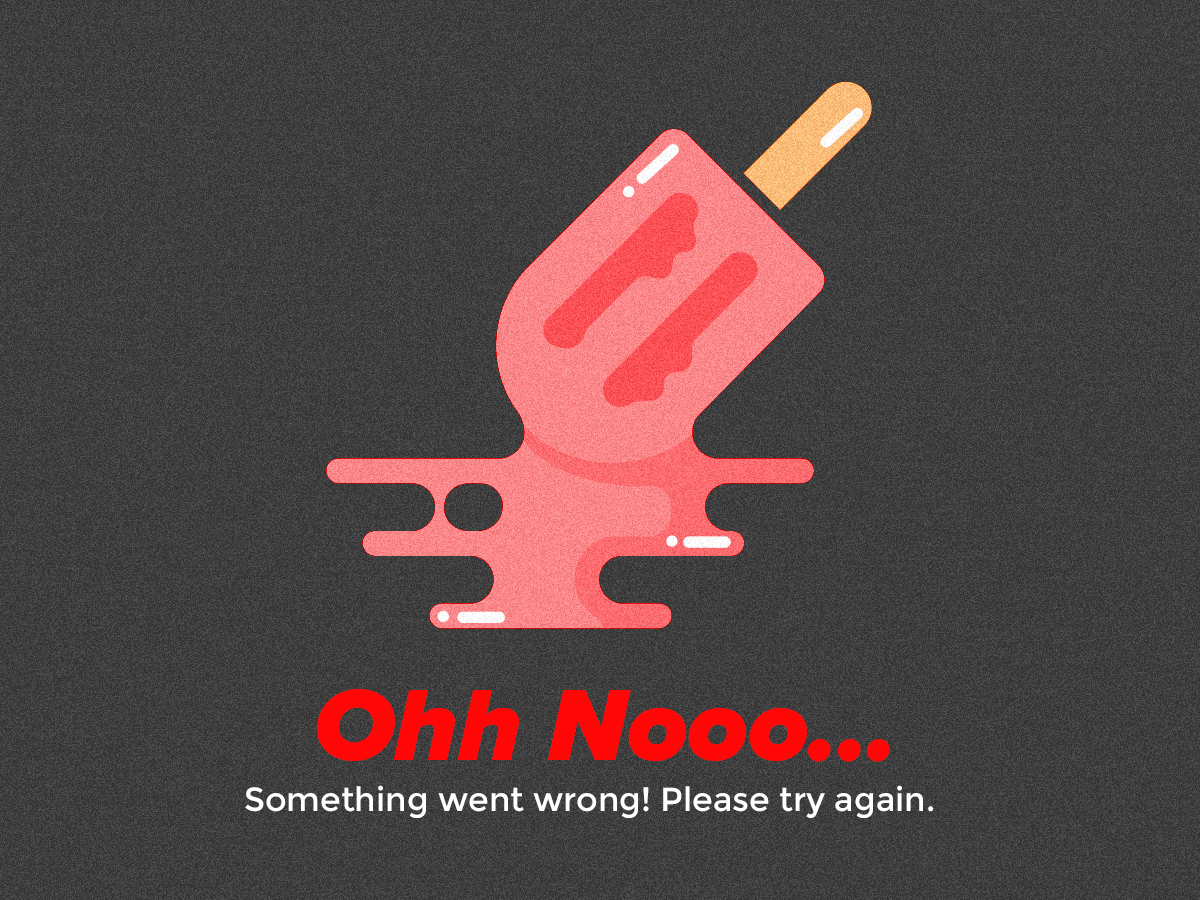 Zomato, Swiggy go offline during lunchtime: Both Zomato and Swiggy went offline for about an hour on Wednesday afternoon. The issue appeared to have been caused by a power outage at Amazon Web Services, which many companies rely on.

Data and analytics providers launch Data Cloud Alliance: Google Cloud and other data, analytics, storage, and database providers said they are forming a new initiative to ensure that global businesses have more seamless access and insights into the data required for digital transformation.

Global Picks We Are Reading

■ Live Fast, Die Young: Behind the Fall of a One-Click Wonder (The Information)
■ Pinterest announces ban on all climate misinformation (The Guardian)
■ Will Smith’s slap became crypto. Inside the wild world of memecoins (The Washington Post)

Today’s ETtech Morning Dispatch was curated by Zaheer Merchant in Mumbai and Judy Franko in New Delhi. Graphics and illustrations by Rahul Awasthi.

Risk-Off Trades: Is the Sky Falling on Bitcoin (CRYPTO:BTC) and Company?

How to help your teen get moving

Mahmood Makes His Classic Suit Cozy With a Statement Jacket