A creative young stunner with the Twitter name Naezrah has flexed her beauty and confidence in photos that show her in unusual makeup and elaborate hairdo.

The young lady uploaded two photos rocking the colours of the rainbow.

Her face beat coordinated with her hairstyle in the attention-grabbing images that have got netizens talking. Be like conductor and insulator wires: Reactions to video of lady with ‘pineapple’ hairstyle

”Metallic rainbow-bright undereye,” she said, adding in the comment section that ”this one was so pretty but so hard to catch all colors on camera with my filming lights”.

The pictures have since garnered reactions from social media users. At the time of writing this report, the post had amassed 2,842 retweets, 191 quote tweets, and over 26,000 likes.

How her followers reacted

Legit.ng compiled some of the reactions below:

”The game has been improved & will never be the same.”

”The way you’re so incredibly pretty is so rude.”

”Innovation at work! Deserves all the credit and love this look is opal personified!”

”At this point, it just ain’t fair! You ain’t taking your foot off our necks! I like it!” 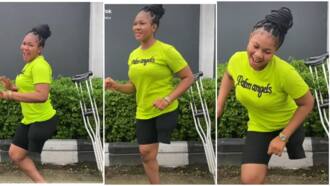 Still on makeup, Legit.ng previously reported that while it is important to look your best at every given opportunity, it is equally as important to surround yourself with people who will keep you on track – fashion-wise.

A video of a young lady posted on Instagram by blogger, @krakshq, has left many people reeling with laughter.

Dressed in a yellow/blue Ankara with her hair covered in a red scarf, the girl who is dark-skinned appeared to have applied the wrong shade of makeup foundation on her face.

Everyone Has Crypto FOMO, but Does It Belong in Your Portfolio?