Why Bitcoin, Ethereum, and Dogecoin Are Falling Today

While potential new regulatory developments in the U.S. have previously been a source of crypto market volatility without amounting to much, it looks like some major changes could be coming soon. According to a report from Bloomberg, President Joe Biden will sign an executive order this week that will direct federal agencies to research potential regulations for cryptocurrencies, and the development is triggering sell-offs.

Some manner of cryptocurrency regulation has reportedly been in the works at the White House over the past year, and it appears that the expected rollout of an executive order this week is at least partially related to Russia’s invasion of Ukraine.

The U.S. has responded to the invasion of Ukraine with strict sanctions against Russia, which in turn contributed to the dramatic devaluation of the latter country’s currency and other economic pressures. However, some have speculated that Russian oligarchs and officials may be looking to Bitcoin and other cryptocurrencies to lessen the impact of the sanctions.

After initially prompting sell-offs across the broader cryptocurrency space, developments related to the invasion of Ukraine appear to have briefly prompted bullish momentum for cryptocurrencies late last month and early in March’s trading. 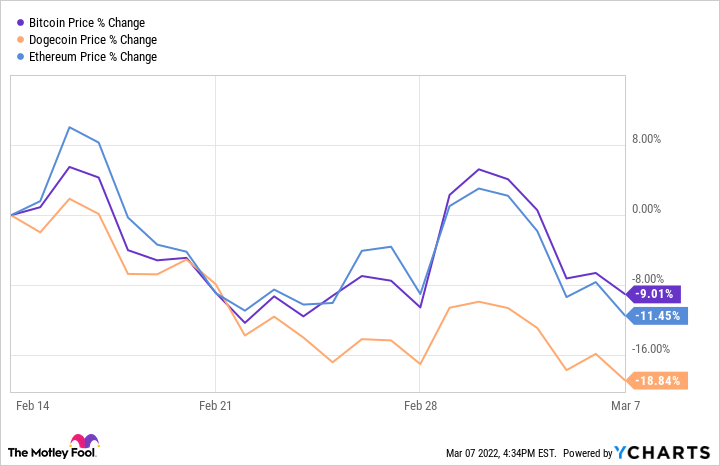 Investment poured into Bitcoin, Ethereum’s Ether token, Dogecoin, and other digital currencies at the beginning of this month as investors bet that decentralized currencies could gain favor in light of tough sanctions facing Russia. However, it appears that the crypto market is now facing renewed selling pressures as crypto holders weigh the potential impact of a tightening regulatory climate.

After volatile swings, Bitcoin has seen its token price fall significantly over the last year, but Ether and Dogecoin are still up big over the stretch. 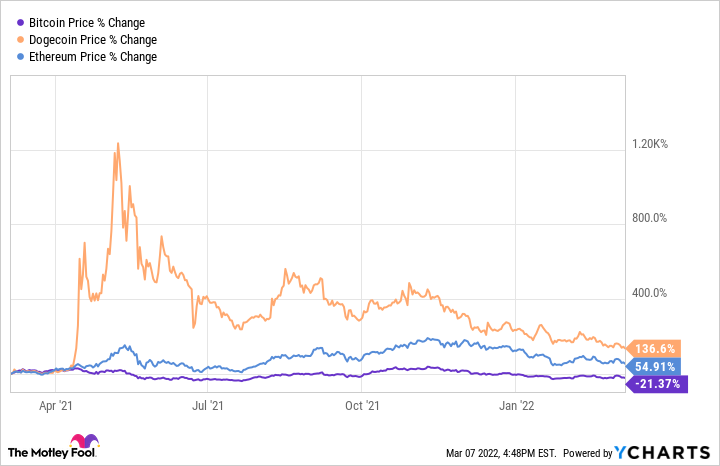 Bitcoin was launched in 2009 and helped spearhead the explosion of the cryptocurrency market. Despite the token now being well over a decade old and cryptocurrencies, in general, having made huge strides in adoption and acceptance, the crypto space is still somewhat akin to the Wild West.

Depending on the content of the executive order that’s expected to be unveiled this week, it’s possible that cryptocurrencies could be in for more turbulent trading in the near term. However, it’s also possible that the order will be pretty mild in the grand scheme of things and put forward relatively minor changes and initiatives that leave the door open for flexible future actions.

This article represents the opinion of the writer, who may disagree with the “official” recommendation position of a Motley Fool premium advisory service. We’re motley! Questioning an investing thesis – even one of our own – helps us all think critically about investing and make decisions that help us become smarter, happier, and richer.

Online system to seek asylum in US is quickly overwhelmed

UAE braces for record number of tourists in February