That pulled a host of Bitcoin mining stocks higher as well. For example, Bitfarms (NASDAQ:BITF), Riot Blockchain (NASDAQ:RIOT), Hut 8 Mining (NASDAQ:HUT), and Bit Digital (NASDAQ:BTBT) were up 14%, 13%, 14%, and 20%, respectively, as of this writing. But those gains were not entirely because of Bitcoin’s move. Some of these companies have also recently released updates about their businesses, and investors’ responses to those news releases contributed to their share price jumps on Friday.

On Friday morning, Riot Blockchain gave its monthly operational update, a common practice among cryptocurrency mining companies. During January, it mined 458 Bitcoins, an increase of 252% year over year and a 7.8% increase from December. The reason for the increase is simple — it’s adding more mining power constantly.

Bitfarms is also adding more hardware to expand its Bitcoin mining operations. The company updated its shareholders on Feb. 1, saying it had mined 301 Bitcoins during January. That was up 51% year over year, but was a substantial drop from the 363 Bitcoins it mined last month. The decline relates to the fact that operates in Canada, and at times during the winter months, the Quebec provincial government asks major crypto miners to reduce their electricity use to ensure that there’s enough for more important things, like heating and powering homes and businesses.

Hut 8 likewise updated shareholders Thursday. It mined 308 Bitcoins in January. And during the month, it increased its hashing power — how mining power is measured — by 17% from just the previous month.

For its part, Bit Digital hasn’t yet updated shareholders in February. But it’s understandable why its stock popped: All of these businesses benefit from higher Bitcoin prices, and on Friday, at least, they were rising. 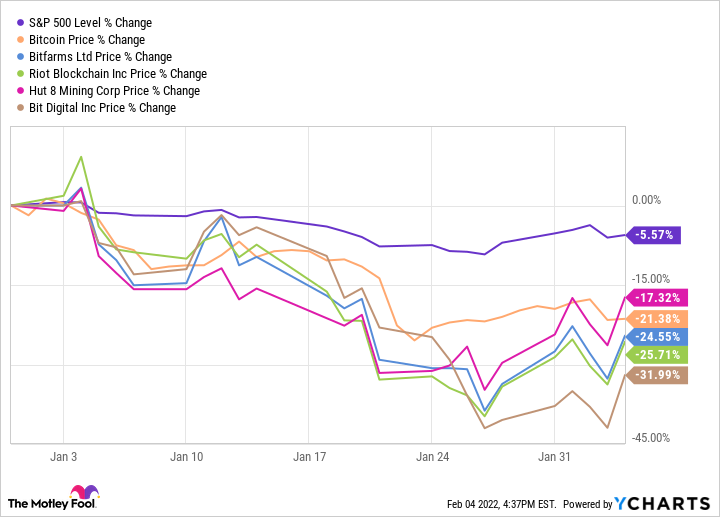 Year to date performances for these four Bitcoin mining stocks, Bitcoin, and the S&P 500. ^SPX data by YCharts

Can Bitcoin keep rising? The answer is far from certain. However, I like to think about supply and demand when it comes to the cryptocurrency. There are currently less than 19 million Bitcoins in circulation, and the protocol caps the total number that ever can exist at 21 million. When Bitfarms, Riot Blockchain, Hut 8, and Bit Digital work to validate transactions, new Bitcoins are unlocked and released, gradually working that total to its eventual limit.

What’s interesting is that because these are public companies, they have easy access to capital that they can use to pay their bills. Therefore, they can hold onto nearly all of the Bitcoin that they mine. As of their most recent updates, here’s how many Bitcoins they were holding:

The public Bitcoin mining companies represent a large portion of the total Bitcoin hash rate. And because they’re holding so many of the Bitcoins they mine, the overall circulating supply of tokens isn’t going up as much as it otherwise would.

Considering these companies don’t need to sell their Bitcoin holdings, I think it’s reasonable to assume a lot of Bitcoins will continue to be held by miners in coming the months and years. And if new buyers continue to come into Bitcoin, as they have over the past couple of years, that increase in demand could cause its price to rise further.

However, if 2022 has taught us anything so far, it’s that Bitcoin remains as volatile today as it ever was. Anyone looking to invest in this space, therefore, should be mentally prepared for a wild ride.

Should You Invest In Artificial Liquid Intelligence? Exploring The Marriage Between NFTs And AI – Forbes